You find yourself stepping up-and-down, moving side-to-side, however you’re going nowhere. The lights blink as your veins fill with the frenzied sounds coming from a mixture of speakers and instruments scattered around the stage. A smile is the result of those large wondrous notes of glory the ears can barely contain. If there’s one thing you know about what you’re witnessing, it’s that you’re glad you came out to witness it. Loyal fans of live music live for this moment. It’s the one point where the pulse between the crowd and the band mutate into one. Last night, at the Ardmore Music Hall, there was a point where the 9-piece powerhouse funkster known as Turkuaz slapped me right upside the head. It came after a mind bending one-two punch which consisted of fan-favorite ‘Tiptoe Through The Crypto’ segueing into fan classic ’20 Dollar Bill.’ The band paused for a brief second before kicking into a cover of the Talking Heads song ‘Slippery People’ a song showcased in the film Stop Making Sense (a film the band has paid tribute to in the past). This band is about as close to the authenticity of this era of the Talking Heads as you can get without even trying to be the Talking Heads. Turkuaz is that good and at this moment they hit me, leaving two thoughts swaying back and forth for the rest of the evening: 1) how lucky I was to be standing so close to a collective of musicians as talented as these guys and 2) could this be the last time I’m seeing this band at the tiny 600-person venue located in the Main Line off Lancaster Avenue. 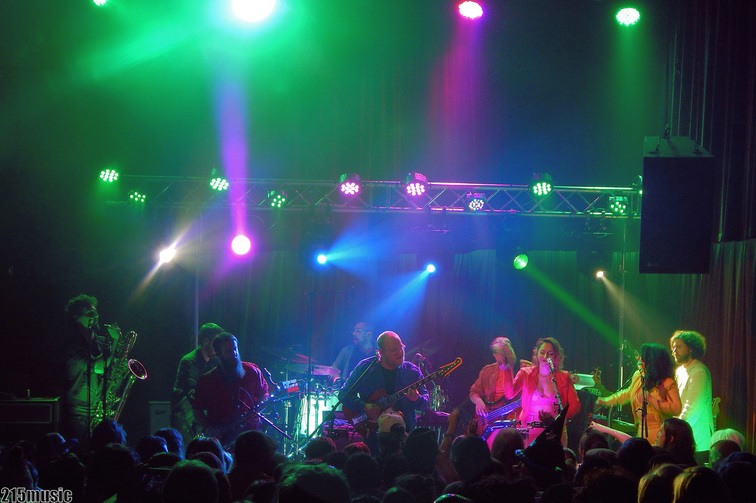 Before last night’s show, I inched my way toward the front. I like watching Craig Brodhead balancing his dual role as both a keyboard player for the band and as guitar virtuoso. Craig was on the stage as the show began accompanying Turkuaz’s world-class rhythm section, which consists of Michelangelo Carubba and Taylor Shell, to get the sound going. The other multi-tasker, trumpet-keyboardist Chris Brouwers was first man to jump into the groove with the rest of the band soon to follow into the night’s opener, ‘The Mountain,’ the opening track to their their self-titled 2013 album. As the rest of the band gets onto the stage you can feel the excitement build up. This band was created for the sole purpose of that little thing we like to call: good times. As you get lost in the sound it would be no surprise if the band were really Bootsy Collins, Nile Rodgers, Eddie Hazel, Bernie Worrell, Sly Stone and all the other funk/r&b greats, dead-or-alive, in their prime and in costume. It’s not until you have the pleasure of seeing Turkuaz play live a couple times that you really get the idea that these guys don’t need to be anybody, they’re creating their own personas. The best example of this is the different colors represented by each member of the band. If front man Dave Brandwein walked onto the stage not wearing his signature color, blue (for example), I’d probably not recognize him at first. Speaking of Brandwein, I want to take this moment to thank both him and bassist Taylor Shell for taking what started as a mere funk project and turning it into one of the best live bands out there right now. Greg Sanderson and Josh Schwartz round out the horn section while Sammi Garret and Shira Elias provide the soul-sister vocals.
​
There was another slight pause after ‘Lookin Good, Feelin Tough,’ the closing track to their second l.p. Zerbert, where Dave told the sold-out crowd that the band would be playing a couple songs from their new album: Digitonium. That’s when the band went into ‘Lift it Up’ the second track on Digitonium and the fandemonium continued. People were getting down last night on that Ardmore dance floor. It’s damn near impossible not to get down when Turkuaz is on stage. They closed their set with a rollicking cover of the Band’s ‘Shape I’m In’ leaving any of those who had been up front dancing and getting down last night in much better shape as a result. The opening act, Pimps of Joytime, were a pleasant surprise. Turkuaz is always taking great bands out on tour with them. You would expect nothing less from a conglomerate of musicians who studied at Berklee to have such a great ear for good music. The Pimps of Joytime found themselves a new fan last night as I will most certainly be on the lookout for when they come back to play in the Philadelphia area. Maybe they’ll even find themselves on a bill with Turkuaz again. As of now, I have three great shows of Turkuaz at Ardmore to treasure in my memories just like the people who came to this same building on 23 East Lancaster Avenue over 20 years ago to see bands like Phish, Dave Matthews Band, and Red Hot Chili Peppers. It’s like the lyrics to the song ‘Future 86’ suggest, “the future is coming now.” Turkuaz is one of the next big bands of the future and they are touring heavily, setting anything in their path on fire. Catch them now while you can still see them up close and personal before their time playing in smaller venues becomes nothing more than a great memory.
Watch the FULL show video and audio here: ​https://www.youtube.com/watch?v=GULZ1WUEwYQ