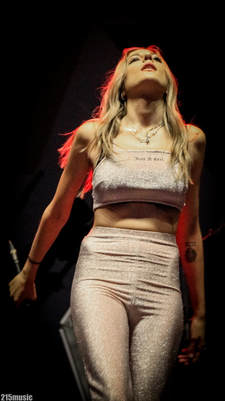 Cloves
Sunday wrapped up a three-day weekend for the 2018 XPoNential Music Festival which included over 35 local, regional and national acts performing rock, folk, country, world, gospel and even a dash of EDM music. Aside from some Friday night showers, the festival enjoyed a weekend of sunny summer weather overlooking the skyline of Philadelphia on the perfect plot of land to host a music festival. As usual, XPN Fest hosts some of their major acts on the Wiggins Park River stage with supporting acts performing on the Marina stage, just 100 yards away. On the first two days of the festival the music continued on the largest of the three stages at BB&T Pavilion featuring headliners like David Byrne, Sturgill Simpson, The War on Drugs, Preservation Hall Jazz Band, Fantastic Negrito, Sylvan Esso, Proper Dark and Cloves.

We saw the XPN Fest ignite with Philly's own Swift Technique on the Marina stage to get the party started, followed by the Greg Sover Band, The National Reserve, M.A.K.U Soundsystem, Lukas  Nelson & The Promise of Real, and finally the newly formed American-rock trio of Bermuda Triangle, comprised of Brittany Howard of Alabama Shakes, Dublin's Becca Mancari, and St. Louis-born singer/songwriter Jesse Lafser. After their unintentional formation that started as backyard jams, this trio made their live debut at the Basement East in Nashville last July and have been generating smiles and gathering attention with their vocal harmonies and catchy tunes ever since.

Changing gears is something you always need to be ready for at a music festival, in this case it was changing venues. The BB&T center filled up Friday night with Proper Dark who recently released their first single 'the Sun over the Sea' followed by a great performance by Melbourne Australia's Cloves, giving the crowd at taste of Scandinavian Soothing Metal with a voice that rivals that of Adele. Cloves is set to release her full-length debut album, 'One Big Nothing', this fall on Interscope Records. Next up, Durham's Electro-Pop duo of Sylvan Esso took the stage Friday night as the sun began to hide away, reminding you that the night is coming and it's time to dance. Closing out Friday night was the highly anticipated performance from David Byrne, currently on tour with a full band and featuring his new album 'American Utopia​' which makes its way to the Mann Center for the Performing Arts on September 20th. 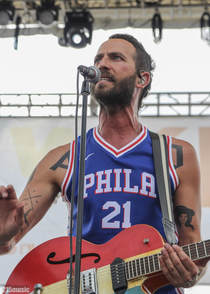 Mondo Cozmo
Saturday kicked off with Philly blues-rocker Katie Frank on the Marina stage followed by Hurry, &More(Donn T & Chill Moody), the colorful Natalie Prass, The Congo's  Jupiter & Okwess, Mondo Cozmo, Courtney Marie Andrews, Femi Kuti & The Positive Force, Sunflower Bean and finally miss Margo Price, who closed out the main stage with an incredible performance to wind down the day as festival-goers then made their way to BB&T Pavilion. On the main stage at BB&T we were treated to blues/R&B, New Orleans Jazz, and good old American rock and roll performances from Fantastic Negrito, Preservation Hall Jazz Band, Sturgill Simpson, and closing out the main stage was Philly's own The War on Drugs. Next month on August 14th, The War on Drugs sets out on their one-week European festival tour stopping in Hungary at the Sziget Festival, The Pukkelpop Fest in Belgium, The Lowlands Festival in The Netherlands, Green Man Festival in Wales, UK, and concludes with a solo show at the Capitol in Hanover, Germany. 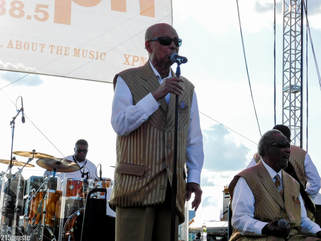 Blind Boys of Alabama
The last day of the 2018 XPoNential Music Festival hosted a smaller group of acts with performances only on the River & Marina stages, beginning with Devon Gilfillian, Mt. Joy, Harmony Woods, Lo Moon, Phoebe Bridgers, the amazing harmonies of Darlingside,a Rivert-stage party with Tank and The Bangas who really got the crowd moving. Hiss Golden Messenger took the Marina stage at 5pm followed by the Grammy-winning Blind Boys of Alabama on the River stage for a calm and relaxing set of gospel music. Closing out both stages were XPN favorites, JD McPherson and Josh Ritter & The Royal City Band, on the Marina and River stages respectively.

In its 25th year of operation, WXPN and its sponsors have once again proved that music is very much alive and well in the Philadelphia area. We're so grateful to them for procuring so many great acts and music choices at the festival again this year. Joined by droves of WXPN  members and volunteers, the local Philadelphia radio station masterfully managed a three-stage festival showcasing amazing music, introduced by the radio and program hosts from 88.5FM, including Bruce Warren, Helen Leicht, David Dye, Eric Schuman, Mike Vasilikos, Kristen Kurtis, World Cafe host Talia Schlanger, the team's latest member, Kaleo, and 30 year veteran of radio broadcasting, WXPN General Manager and NPR Board member, Roger LaMay. On behalf of 215music, a big thanks to WXPN and their teams for having us out once again to cover this amazing Philadelphia music event. We'll see you all next year back in Wiggins Park!