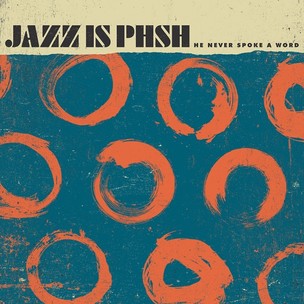 Jazz Is PHSH released their debut album yesterday, March 3rd, He Never Spoke A Word. Mixed and engineered by Bryce Goggin, the same man who engineered Phish's Farmhouse(2000) and Round Room(2002), collects all the fan favorites, including "Ghost", "Cars Trucks Buses", "Weigh" and "Foam". He Never Spoke A Word is available now on Spotify and directly via the band's website at JazzIsPhsh.com/Shop. Jazz Is PHSH returns to Philadelphia on 4/20 at World Cafe Live on Walnut St. Tickets here

"It's been such a fun process introducing the music of Phish to players from different musical backgrounds and getting to enjoy their unique interpretation of the arrangements," says Adam Chase, leader of Jazz Is Phsh. "Hearing Dennis Chambers, Jeff Coffin, Michael Ray, Kofi Burbridge, Chris Bullock, Grant Green Jr., Jonathan Scales, Carl Gerhard, Anthony Wellington etc., put their flavor into the music has been fun for me both as a musician and as a fan of Phish.  I am excited for everyone to hear what we created together.  I am proud to have been able to bring all these musicians together and honored just to be a part of it."

The all-star Phish tribute band is currently on the road for a series of unforgettable performances, showcasing a wheel of exemplary musicians, celebrating a beloved, 34-year catalog. The band performed last night in Atlanta, with dates through the end of April, culminating with a show here at Philadelphia's World Café Live on 4/20 sponsored by Oskar Blues Brewery. The Jazz Is PHSH live show collects a rotating cast of esteemed musicians, fully embraced by the phan community and known to impress. Information regarding the remaining tour dates (below) and featured musicians can be found at http://jazzisphish.com/tour-dates/.