​Two popular Ardmore businesses, entertainment mainstay Ardmore Music Hall and restaurant hotspot Ripplewood Whiskey & Craft, are joining forces in a new partnership between current AMH owner Chris Perella and Ripplewood owners Biff Gottehrer and Pete Martin.  Martin, who purchased the real estate of the former Fellini Café at 29 East Lancaster and adjacent storefronts, approached Perella last fall to discuss the possibility of combining their efforts on Lancaster Avenue. Of the partnership with Ripplewood, Perella shares that it is both “special and sensible” as the teams operating both businesses will be able to share resources, ideas, staff, and support to create an unparalleled fan & guest experience.

Ardmore Music Hall, known as The 23 East Cabaret and Brownies 23 East between 1980 and 2012, was refreshed and rebranded in 2013. When Perella and partners purchased the club in 2014, they began to bring an elevated level of talent to town with nationally touring acts and sold-out shows featuring artists ranging from George Clinton and P-Funk, The Hooters, Toots & The Maytals, The Revivalists, Tim Reynolds, Stanley Clarke, Snarky Puppy, Television, Macy Gray, and The Psychedelic Furs. They also began offering more private events such as Bar & Bat Mitzvahs, the “Funky Brunch” featuring live music and craft vendors, and local acts like Grateful Dead tribute band Splintered Sunlight, who have played the venue over 1,000 times over several incarnations. “Unlike most Philly area venues, AMH isn’t backed by a major national corporation… it’s a true Mom & Pop operation” says Martin. “By combining our businesses we are strengthening both operations so that we can better serve the Main Line community with great tasting food and great sounding music.”  ​ 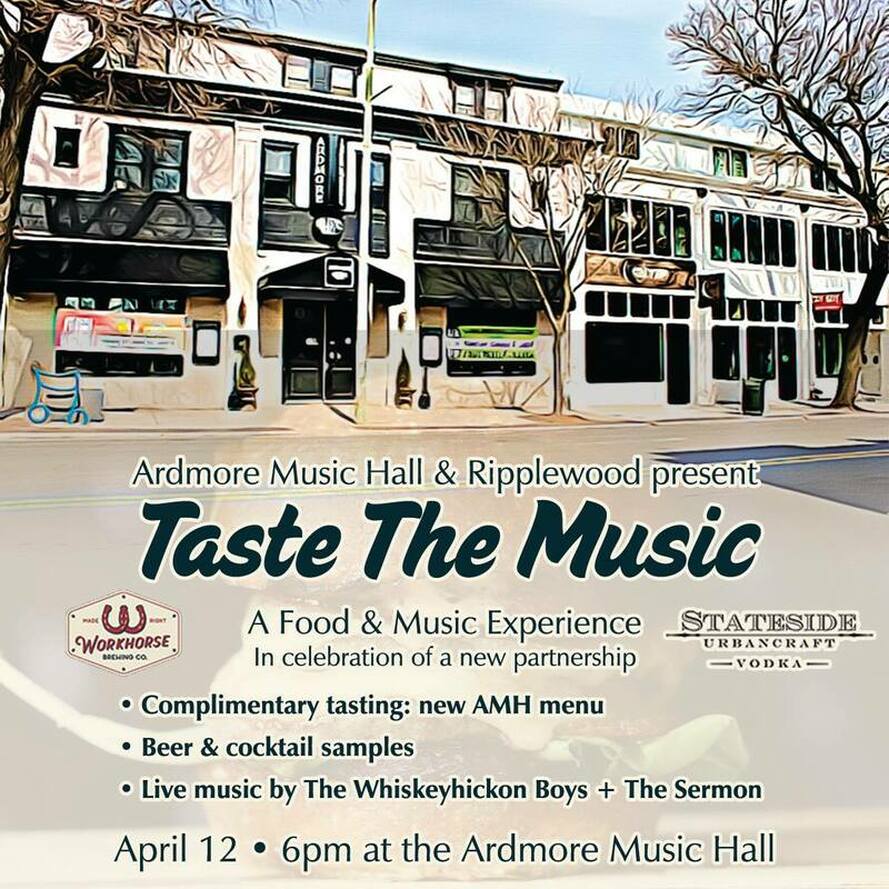 Ripplewood Whiskey & Craft, located directly next door to the Music Hall, opened to much fanfare in April 2018. Martin, who has been a real estate developer, investor, and Main Line resident since the 90’s, purchased the real estate for 29 E. Lancaster Avenue in May of 2016 in anticipation of Ardmore coming into new prominence. He then sought Gottehrer, an alum of both the Stephen Starr and Jose Garces culinary empires, to join the operation and create a modern American menu featuring high-quality local ingredients and an innovative cocktail program. The restaurant has quickly risen the ranks of the hottest Main Line eateries. Says Chef Gottehrer: “my first job was in Ardmore, I grew up 5 minutes away, my first show was at Brownies, and it has come full circle to open the Ripplewood and now to partner in AMH and give back to this great community that has been a part of my life since day one.”

Perella, Gottehrer, Martin and their management team are currently planning for exciting futures for both businesses, including capital improvements to AMH, such as a Lancaster Avenue-facing marquee and improvements to the service and comfort of the venue for fans & artists. One of the first ways they are combining efforts is the introduction of new menus at Ardmore Music Hall.  “We’re excited to elevate the food and beverage program at AMH” Perella says. “Offering diverse and interesting food at the Music Hall is something we’ve always wanted to do, but was difficult considering we are concert-focused first and foremost. With support from the Ripplewood team, we’ll be able to offer more fresh, seasonal and inspired food options. This is just the first of many ways we plan to grow with each other, and this community”.

To celebrate their partnership and highlight the new and exciting food program, Ardmore Music Hall will be open to the public with an event on Friday April 12th. Guests will be able to sample more than a dozen items from the new menu, created by the Ripplewood & AMH team led by Executive Chef Biff Gottehrer, as well as offerings from the Banquet / Private Events menu featured for Weddings, Mitzvahs & more. In addition to sampling the new dishes, guests will enjoy samples of new craft cocktails created by the Ripplewood & AMH operations team. Live music from two great local bands- The Whiskeyhickon Boys and The Sermon - will provide the soundtrack to the party.

Tickets to the event cant be purchased here: https://www.ticketfly.com/purchase/event/1847988
Festivities kick off at 6 PM on 4/12 - visit www.ardmoremusic.com to find out how to reserve your experience.  Complimentary samples of the following menu items will be available throughout the evening: 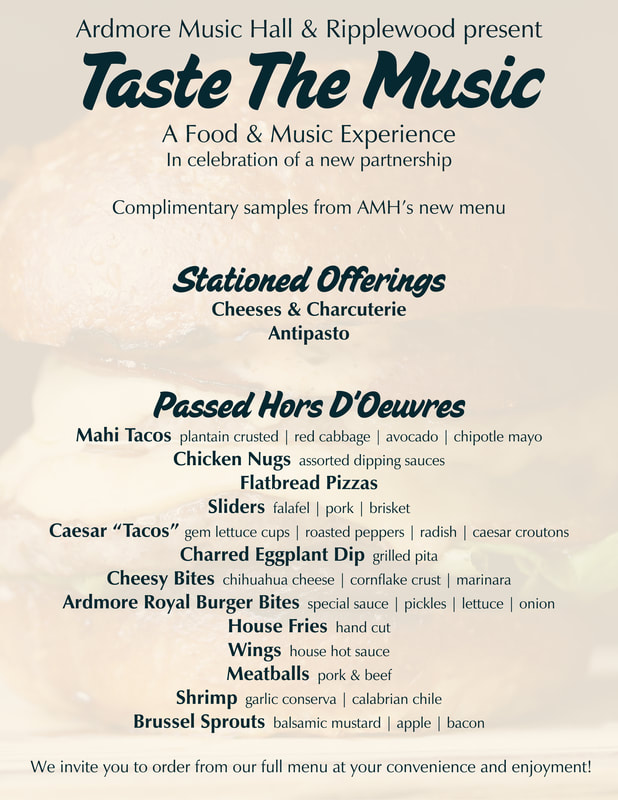