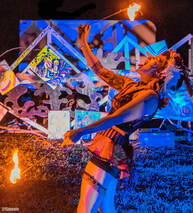 This past weekend Kollective Grounds hosted their third annual four-day camping and music festival at Kempton Fairgrounds in Kempton, PA, just west of Allentown. Karnival of the Arts is known for showcasing national, regional, and local acts, as well as live performers and local/regional artists, with themed nights and carnival games & attractions. Over the course of the festival, fans meandered between the stages and played carnival games, visited the festival merch booth, craft and food vendors that offered everything from tasty eats & drinks, stylish threads, psychedelic art, stand-up comedy shows, mask-making, face painting, and fun playground activities for the kids, with live flow and fire performances across the campus.
​
We found many festival goers stopping by the Bubble Tree, where visitors could encase themselves in a large bubble and also take their shot at creating the biggest bubble they can create. Everyone had something to do while taking in the beautiful weather and the serene view of the hillsides & campus of Kempton Fairgrounds. We found the Dunk Tank to also be an entertaining spot for laughs, where festival goers would take shots at dunking the festival's founders in the water tank with 3 throws at the target.

In its third year, the Karnival of the Arts presented another high-hitting event which featured a VIP night on night 1 with Ralphreal & The Family Jam, Swaamp, Yam Yam & late-night space jams from Solar Circuit. Friday, day 2, kicked off with a fun set from local act, Polyjamorus, pumping out fun tunes and covers, and would also perform another set later as Mums The Word, the wild psychedelic rock troupe. Leading us into the evening, we caught the west coast's Half Hour Late, who put a fun and raucous performance followed by Freekbass & The Bump Assembly headlining the main stage for a funky good bass-led time, with Denver's Squeaky Feet on the inside stage, late night, to follow. Check out a clip of their set below. 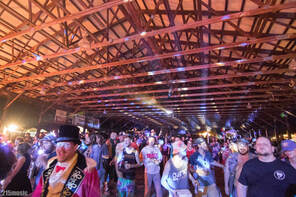 Saturday at Karnival of the Arts brought a performance from instrumental folk-rock trio, Knorrwood, followed by Electric Moose Knuckle, sly funky jams from Nester, and a powerful performance from Joe Keyes & The Late Bloomer Band to follow. After the sun had set, we saw the long-awaited, headlining festival slot for Philly future-funk trio, Muscle Tough, as they took over the main stage, dealing out a fun horn-filled dose of future funk with guests The Horn Section and DJ Logic perfectly adding to the mix and giving the trio a full-band sound. South Jersey prog rockers, Out of the Beardspace, followed up to give the festival some high-energy jams on the Indoor stage for two sets from 11-3am+. Out of the Beardspace recently released their latest album 'Like Moths to a Flame' in May.

Joining the action on Sunday was a funky set  Funk Norris at noon, then we visited the Inside stage to check out 17-year-old Skylar Love sing original tunes and perform solo on guitar. At 1pm we headed back to the main stage and saw a special performance by bass extraordinaire, John Ferrara of Consider The Source, who also delivered a masterful, deep-reaching and calming solo set on a gorgeous day. Later in the afternoon we were treated to the Karnival of the Arts Allstars for some fun covers and jams, comprised of the Karnival of the Arts festival's sound & stage crew performing together with The Late Bloomer horns and with snazzy Baltimore keyboard extraordinaire, Natalie Brooke, who performed again following the set billed as Natalie Brooke & The Infinity Tribe.

​Marcus Rezak's Shred is Dead & the Zappa Experience joined by Ike Willis on vocals and guitar headlining the main stage with back-to-back sets of Grateful Dead and Frank Zappa tunes, topped off with a delightful fireworks display in the distance. Medusa's Disco took the inside stage at 11pm for a wild set of music that took the festival into the witching hours with the Balkun Brothers Sax/Bass/Drums trio closing the festival out, as festival goers made their way through their final night at Kempton Fairgrounds. Check out photo sets and video clips from the 4-day festival below.