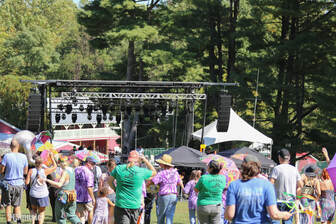 This past weekend The Ramble Festival hosted their inaugural three-day camping and music festival at Camp Ramblewood in Darlington, MD, showcasing national, regional, and local acts among the jamband, bluegrass, and brass band flavors with everything in between, hosting separately themed days and fun-filled attractions. Over the course of the festival, fans meandered between the three stages and visited craft and food vendors that offered everything from tasty eats & drinks, stylish threads, psychedelic art, and other wares across the Ramblewood campus. Every morning at The Ramble started off with a second line parade, looping around the concert venue led by Naptown Brass Band from Annapolis. Spanning the three days, friendly volunteers and helpful 'Vibe Tribe' members kept the Ramblewood campus in pristine order and provided smiles & fun for everyone. With flawless stage transitions, hand-picked acts, and high-quality sound, the Ramble Festival ran like a well-oiled machine for its first year on the scene...and just announced on Saturday, the Ramble Festival will return to Camp Ramblewood in 2023, October 6-8.
​ 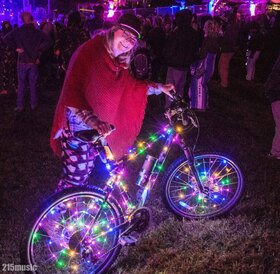 On Friday, after a welcome greeting by a second line parade into the venue, Abby Bryant & The Echoes got the festival stages going with a sunny afternoon set of original tunes, later followed by Arkansas's picking quartet, Arkansauce. We later saw Kendall Street Company and also Big Something both deliver fun sets on the main stage, with picker Caleb Stine, Rufus Roundtree and Da B'more Brass Factory, and Bella's Bartok all inside at the Beer Hall stage. The Friday theme was 'Light Up The Night', leading to a very colorful night of glowing and blinking lights attached to people all over the concert field. Headlining Friday night, Keller Willams was joined by The Hillbenders for some fun Grateful Dead jams that we all know and love, followed by Kendall Street Company & The Dirty Grass Players to close the night out at the Barn Stage with a proper party into the witching hour.
​ 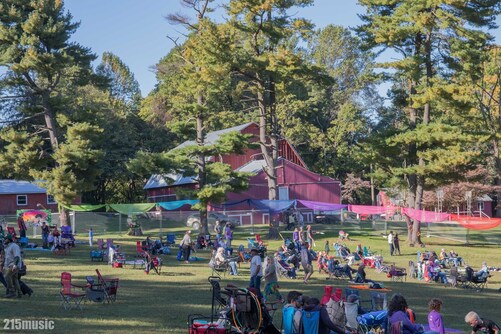 Saturday at Ramble kicked off with Baltimore's Charm City Junction followed by Armchair Boogie, Underground Springhouse, and with Dogs In a Pile performing a rocking set on the main stage. Saturday's theme at the festival was 'Roar it Out', where festival goers were dressed in their favorite barnyard animal, insect or dinosaur onesies, which helped them keep warm with the dropping Fall temps. After grabbing a tasty burrito from Cosmic Charlie's, we saw an energetic set from country blues trio, Reverend Petyon's Big Damn Band, followed by Kyle Hollingsworth of the String Cheese Incident performing with his band, and finally we took in a great set from jamgrass titans Leftover Salmon to close out the main stage.

Sunday's theme was 'Drink it Down', celebrating Oktoberfest, and we found handfuls of festival goers sporting lederhosen and fitting the part with traditional German Oktoberfest garb. Asheville's The Travers Brotherhood brought their own flavor of Blues and Rock to get the day going, followed by seven-piece country pickin' US Navy band, Country Current, at the Beer Hall Stage and then northern California's AJ Lee & Blue Summit on the main stage. Back inside at the Beer Hall stage, we finally caught up with Philly Americana/Jam troupe, Muskrat Flats, dealing out a powerful set to Ramblers. Later back at the Main Stage, we saw another lively set from Boston's Neighbor, their second Ramble performance of the weekend, followed by Asheville's 9-piece Empire Strikes Brass, and then by Pink Talking Fish, as they playfully dished out their home-brewed fusion of Pink Floyd, The Talking Heads, and Phish tunes. Sunday night Headliner, The Travelin' McCourys, closed out the Ramble Festival on the main stage and gave away an autographed banjo to a lucky winner. Check out photo sets from the 3-day festival below, big thanks to Ramble Festival for having us out!