ETCHINGS IN AMBER is a duo project by NATALIE CRESSMAN and guitarist MIKE BONO. The project features Cressman on vocals ("Chainsaw" eschews her trombone for this recording) and Bono on acoustic guitar. Cressman and Bono composed all nine tunes on this CD, with Bono penning most of the compositions and Cressman writing all the lyrics.

With its mix of jazz with folk and indie rock, the genre-bending music on this CD is complex yet very approachable.  Fellow red-head and sometimes boss, Trey Anastasio has said of Natalie, “I first met Natalie when she was 18, and I was instantly floored by how melodically and naturally she played and sang. Natalie is the rarest of musicians. Born into a musical family and raised in a home filled with the sounds of Brazilian music, jazz, and Afro-Cuban rhythms, she is seeping with innate musicality. Musicality is in her DNA.”  On ETCHINGS IN AMBER, Cressman’s voice has an alluring smoky quality, and her singing style comes out of the tradition of vocal jazz but with a distinctly contemporary feel. Bono is an accomplished arranger and improviser. Several of the tunes on this CD were originally written as solo guitar pieces. “I usually start writing music by following a melody that I'm hearing and then search for interesting chords that reflect the meaning of the song and support and enhance the melody,” says Bono. He wrote “Dusk,” the opening song, for solo acoustic guitar tuned down a whole step to get a rich and lush timber. Cressman’s sensitive lyrics capture the poignancy of a deep and long-term relationship. 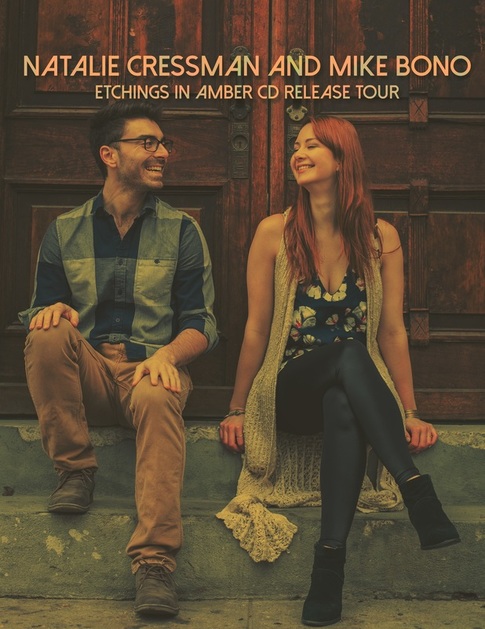 “Folds of Time” is another composition that started out as a solo guitar piece. Cressman says, “Mike’s arrangements can be very difficult to sing. My training as an instrumentalist really helps me navigate through his complex harmonies. ‘Folds of Time’ is one of the more difficult of Mike’s melodies, and finding the right words to flow easily with the big intervallic leaps and still remain somewhat poetic was definitely a great challenge."
“Losing Grace" is one of the three pieces on the CD written by Cressman. Bono relates that, “Natalie sent me a demo recording of this song and brought a lead sheet to a rehearsal session. She has a distinct writing style that I think lends itself very well to the piano, so it's always a fun challenge to try and come up with guitar parts that support and reflect the nature of the song.”

Bono wrote "Trapped in Forever" while on tour in France in the summer of 2015. He often utilizes open strings chords in his compositions and arrangements that create an ethereal, rich, and fluid sound. He says, "Open strings can not only help chords to speak and resonate in a really special way, but they can also be used to allow several notes of a melody to linger together at the same time. Kind of like in a string quartet." For this piece, he wanted to see if it was possible to maintain this quality, but without the use of open strings. Cressman adds, "I keep a little notebook of interesting phrases that I jot down when they occur to me, and when I'm having trouble getting started with a song, I often peek back at things I've written down for inspiration. I really enjoy using idiomatic phrases and turning them on their head. I tried to match the moody and floating nature of Mike's haunting melody with lyrics about the growing distance and silence between two people. The last line of this song is also where the idea of the album title came from." 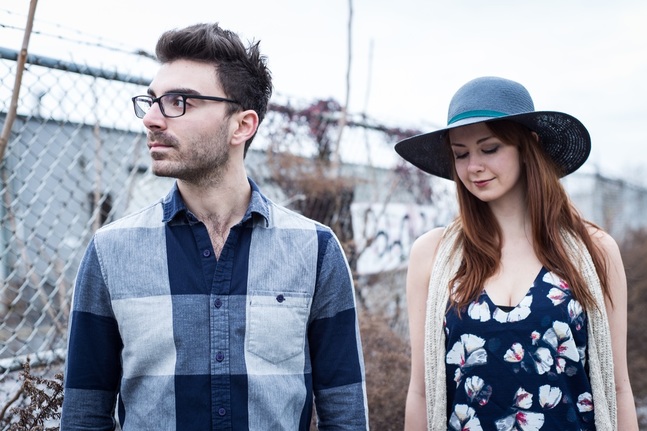 Wind of Whims - recorded Aug. 10th at Sofar New York
Besides performing as sidemen in other projects (Cressman can be heard playing on Phish’s studio album, Big Boat, released today) and playing with their own bands, Cressman and Bono having been honing their duo chops for a while with regular performances at The Dead Poet, a bar on Manhattan’s Upper West Side. Those performances have given them the time and space they needed to create their unique sound and the impetus to record this CD. With Cressman’s and Bono’s strong musicianship and intricate but highly accessible compositions, ETCHINGS IN AMBER shows that the future of jazz is in good hands.