Always on the radar of the folk and Americana faithful in the Philadelphia area, the Ardmore Music Hall will bring in a heaping helping of top notch singer-songwriters to their calendar for the spring season in the form of Canadian cowboy Colter Wall, Tennessee songwriter John Paul White (of The Civil Wars), and midwestern songstress Lissie and two Philadelphia Folk Fest veterans in Memphis songstress Valerie June and outlaw country legend Steve Earle.

Kicking off the month of songwriting genius, multi-instrumentalist Valerie June will hit the stage at 23 East for the first time on May 3 on her Astral Plane spring tour. The Memphis based songwriter has a sound that is deeply rooted in Appalachian folk tradition, blues, gospel and soul. A truly unique songwriter and musician, June has swiftly risen through the ranks of the national scene and steadily gained a vast following of fans and peers alike after her 2017 release The Order of Time. She has worked and played alongside members of The Black Keys, Dave Matthews Band, Old Crow Medicine Show, Booker T Jones and more. Songwriter and frontman of The Whigs, Parker Gispert, will provide additional support. ​
Just a few days later, outlaw country songwriting legend Steve Earle will return to Ardmore as a stop on his spring tour in support of his most recent album, "Guy". A stunning and masterfully created tribute to one of his two main songwriting mentors, "Guy" pays homage to Texas songsmith Guy Clark, a musician that he met early on in his career and had a lifelong impact on his creative output. "Guy" could be considered a follow up to Earle’s 2009 release of 'Townes', which paid tribute to his other mentor Townes Van Zandt. Steve Earle & The Dukes are taking these new songs out on the road and will be at the Ardmore Music Hall on May 6 with support from The Mastersons.

On May 9, Americana singer-songwriter Colter Wall will keep the country theme alive at Ardmore. A young up-and-comer on the national folk and country scene out of Nashville by way of Saskatchewan, Canada, Wall has captivated audiences with his unique blend of country, folk, and Americana rock. With a sound reminiscent of the classic Southern stylings of Ramblin’ Jack Elliot, Gram Parsons, and Willie Nelson, it’s no question how he has become a beloved musician so quickly. His songs have even been featured in the soundtrack of television shows like Dog The Bounty Hunter and in award-winning movies, most notably 2018’s 3 Billboards Outside Ebbings, Missouri. ​

The next night, Ardmore Music Hall welcomes nationally recognized folk/Americana lyricist in John Paul White. Most notably, White was one half of the 4 time Grammy award winning duo The Civil Wars until their break up in 2014. After a short break, White returned to a strong solo career with his 2016 release “Beulah,” and will be setting out on a tour in support of his most recent effort “The Hurting Kind” set to be released this month on April 12. White will be supported by Nashville singer-songwriter Erin Rae on May 10.

The following week, midwestern pianist and songwriter Lissie will stop by on her tour in support of her brand new album “When I’m Alone: The Piano Retrospective” on May 15. For Lissie, her past - the last decade or so, to be specific - is something still very much alive and open to interpretation and rephrasing. With the approaching release of  “When I’m Alone”, the singer is poised to show listeners that her past is hardly static, that the songs she wrote nearly 10 years ago are still fresh and vibrant, evoking feelings old and new.
​ 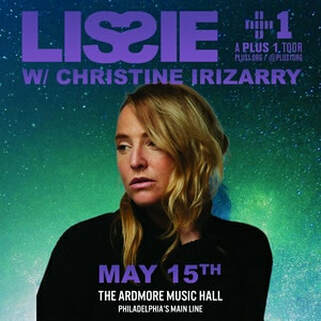