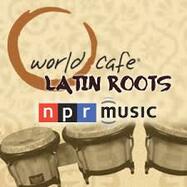 Sept. 16: Chicano Batman - Live recordings of some of their newest music and an interview with the band’s singer, Bardo Martinez, who’ll tell how bumping into musician Brittany Howard (Alabama Shakes, Bermuda Triangle) in downtown Los Angeles influenced the band’s sound.
​
Sept. 22: Carlos Santana - One of the most influential guitarists of the last 50 years talks about his famed Woodstock performance, how the surprise hit “Smooth” featuring Rob Thomas came together, and provides incredible live performances.

Oct. 1: Rodrigo Y Gabriela - Known for their mind-blowing guitar work, the duo deliver an amazing interpretation of Pink Floyd’s “Echoes,” talk about why they chose that song, and how they make their two-piece acoustic guitar duo sound so huge.

Oct. 7: Jorge Drexler - The first Uruguayan to win an Academy Award (for the 2004 film Motorcycle Diaries) also trained as a doctor before becoming a musician and moved around the world. The charming and poetic overachiever performs a whimsical set of live songs from his album Salvavidas De Hielo, and reflects on the many twists and turns his professional life has taken. After this interview was recorded, Drexler was awarded Record of the Year, Song of the Year, Best Singer-Songwriter Album for Salvavidas De Hielo at the Latin Grammy Awards.
Oct. 8: ÌFÉ - In an interview hosted by Felix Contraras of NPR’s Alt.Latino, Afro-Caribbean artist Otura Mun (ÌFÉ) - who was raised in Indiana but fell in love with Puerto Rico after a chance trip there - talks about arriving on the island with only $150, sleeping on the streets, and finding himself immersed in music. He also shares his longtime love of artist Steve Winwood, and presents a special extended live version of his cover of Winwood’s “Higher Love” recorded at the World Cafe Live concert club in Philadelphia.
Oct. 14: La Santa Cecilia - The acclaimed Los Angeles-based band takes listeners to the place where it started: Olvera Street, the Mexican marketplace that is one of the city’s oldest sections. Lead singer Marisol and her longtime brother in song, Pepe, talk about busking among the vendors, being inspired to give a surprise performance there, and how the street has played an important role in her family’s life: from her parent’s first date to the day she decided to take over running the stall that her grandfather first started there in the ‘60s.